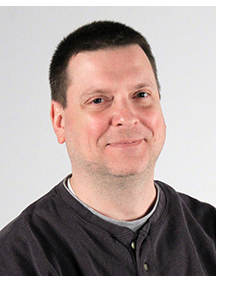 You have come to this page for one of two reasons: either you are a student interested in knowing more about your professor or you are a stalker. Either way, welcome.

What do you need to know about me? Well, I'm not above making stuff up — I don’t let the truth get in the way of a good story — so consider anything you read on this page to be suspect at best.

I have had many jobs, including magazine editor, graphic designer, typesetter, computer consultant, freelance writer and newspaper columnist. I have also waited tables, bagged groceries, input data, delivered newspapers, sold beer and hamburgers at an amusement park, worked in a grocery-store deli and worked in a small, independent book store.

I am married and have two children, Ben and Carly. My wife, April, and I have been married since 1997. We live in Jeffersonville, Indiana. April works for Today's Media, which produces Today’s Woman magazine, as well as Today’s Transitions. She is the production editor. We met when I was a doctoral student at the University of South Carolina, where April earned her journalism degree. I have a master’s degree and a bachelor’s degree in journalism from the University of Texas. And I do believe the Eyes of Texas are upon me.

I was born in Rochester, New York — Gates, New York, to be exact. Sports Illustrated once called Gates a “well-scrubbed suburb of Rochester.” That’s more or less correct. I remember lots of snow — lots and lots of snow. I went to Walt Disney Elementary School and Gates-Chili Junior High School — that’s not important, but I wanted to get Walt Disney in there somewhere. I moved to Laredo, Texas, when I was in eighth grade. Laredo may not be purgatory, but you can see it from there. I moved from there before my senior year of high school. I ended up graduating in Centerville, Ohio. Centerville is known for, well, nothing. Actually, it has more stone houses than any other city in Ohio, which I suppose is something. Then I went back to Texas for college. Add in my stay in South Carolina and my time in Southern Indiana, and you know where I’ve been. By the way, Jeffersonville, Indiana, is the “sunny side” of Louisville, Kentucky. — just so you know, stalkers.

My father, Ron, currently live in Las Vegas. Why? I have no idea. My mother, Anne Marie, passed in 2020. I have an older sister, Tere, who is an actuary in Dallas. She can tell you, statistically speaking, when you will die. She is married to Glenn, and they have two children, Aaron and Renee. I have two younger brothers, Ken and Brian. Ken does computer networking for an automotive auction house. He lives in Indianapolis with his wife, Stacey, and their three children, Thomas, Shelby and Sabrina. Brian is an accountant in Houston where he lives with his wife, Mandy.

I am also a deacon at First Baptist Church of Jeffersonville. I am blessed to be able to serve in this way.

That should do it for both groups. Now, go run and play.